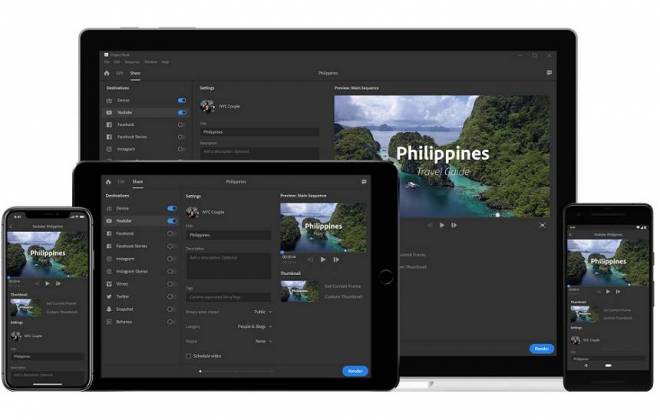 Adobe announced some news on Monday (15) and the main highlights are the launch of a version of Premiere dedicated to youtubers, Premiere Rush CC, and the arrival of Photoshop CC to the iPad. The new programs were presented with preview of Adobe ...

Premiere Rush CC is a “simple and powerful” editor that works on PC, tablet and smartphone. Adobe guarantees that the new program is easy to use and offers intuitive and advanced features for editing audio, video, motion graphics controls, color and publishing — it comes prepared with specific output formats for YouTube, Facebook or Instagram, for example.

The Android version of this software will be released in 2019. Premiere Rush CC is the new lightweight version of Premiere Pro CC.

It has all the basic functions you would expect from any creative video editing software. It allows you to capture, edit, audio, motion graphics and color correction and allows you to publish your masterpiece directly to YouTube, Facebook, Instagram and other social media platforms.

In addition to the above-mentioned features, Rush also offers a one-click audio mixing feature that helps you adjust the background music automatically during narration.

The software is coming with a $9.99/month plan for the individual. But there is also a starter plan (free), which allows users to create an unlimited number of projects on desktop and iOS and export three of them for free.